I am the Boggle Master! Okay, I can’t back that up. But I’m pretty good. And I love to play. Lets me stretch the vocab muscles while beating others into submission. What could be better than that? Of course, no one wants to play with me now, which kinda sucks. But it’s a perfect game to celebrate my vocabulary month.

Why Boggle over Scrabble? I don’t know, I guess because with Boggle, you’ve got at least a fighting chance to get a word. Besides, after getting “vizier” in Scrabble, I decided I should probably quit on a high note.

Now, I personally own the Boggle Master edition, which has a 5×5 letter grid instead of a 4×4 letter grid. The State Master encyclopedia has this to say about Boggle Master (along with rules for this and the regular game):

Is it just me? Or is that a hilarious way to describe a game that is essentially unavailable? Maybe I have an eBay-worthy gem in my closet!

Basically, the goal is to make words from adjacent letters, with a minimum of 4 letters (3 letter minimum for the regular game), without reusing letters, and they have to connect in order.

So, if you’re going to spell tire, the T has to touch the I, the I has to touch the R and the R has to touch the E. And you have 3 minutes (for the Master version, anyway) to get as many words as you can. Words that are 8 letters or longer garner the most points, but you get point bonuses for each word longer than four letters. There are other rules, but hey, unless we actually play, they’re unnecessary to know!

So, for shits & giggles, here’s a snap I took this morning. Admittedly, I’m a little out of practice – it’s probably been four years since I was able to convince someone to play it with me. In 3 minutes, I was able to get 12 words, including one 8 letter word and two 7 letter words. What about you? 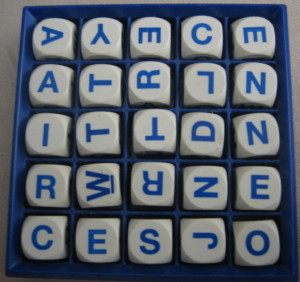