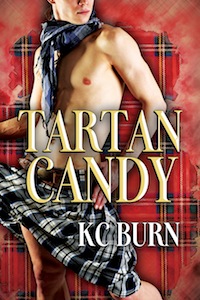 Finally, another new release! It’s been so long, but I’m hoping you’ll love Raven and Caleb as much as I do.

I’m posting at a number of sites to celebrate this new release, with a chance to win something, as well as find out a little bit more about Tartan Candy. Here are the sites, if you want to visit.

Caleb Sanderson, an entrepreneur with his own HVAC business, has no idea what to expect when he steps into Raven’s hotel room to fix his AC unit. They’re attracted to each other, but Caleb, closeted, can’t afford a gay relationship, not with his mom pressuring him to produce grandchildren. If he wants to keep Raven—who no closet could hold—he’ll need to tell his family the truth. But Raven has a few secrets of his own. He refuses to reveal his porn past to Caleb, a past that might be the final obstacle to Caleb and Raven having any kind of relationship.

Tartan Candy is available at Dreamspinner Press, Amazon, and All Romance eBooks.