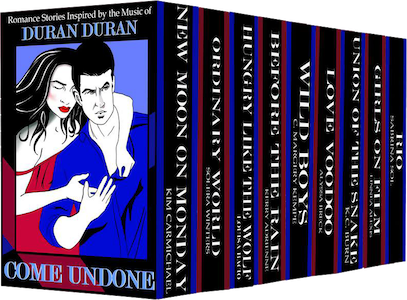 Once upon a time in the 80s there was a band, whose members stole the hearts of many a young girl. With their guyliner, unique fashion and music that struck through the heart, Duran Duran changed how we hear and see music. Today nine hot romance authors bring you stories inspired by their music.

New Moon on Monday by Kim Carmichael
Though she wants to experience the world and write poems, Luna Morrow conforms rather than allow her creativity to soar. Pampered, passionate, fashion designer Owen “Blake” Blakeney finds his muse the moment he spots a gorgeous, alternative waitress at the Club New Moon. After a wanton tryst in the back room of the club, Luna disappears. With his sights set on finding Luna, he sets out on a quest, to locate his mystery girl, and convince her to walk in his fashion show, though he never expected her to walk into his heart.

Ordinary World by Solera Winters
After a chance encounter at a coffee shop, an accident leaves employment agent Tessa Toussaint in a coma, while techie Yancy Howard finds his dreams filled with this fascinating woman. As the clock ticks on Tessa’s condition, Yancy falls deeper for the woman in his dreams.

Hungry Like the Wolf by Louisa Bacio
Janie never imagined her deepest fantasies coming true. She’d been flirting with the hot DJ at an ’80s club, but taking the interaction to another level seemed impossible. Until she runs into Tyler, her high school boyfriend, on the dance floor, and he makes all the right moves.

Before the Rain by Kerry Adrienne
The war is over, but the rain continues, day and night. The rebel faction, Verity, enlists Maddox to safely guide assassin Allana, out of the city. No problem. He’ll escort her, get paid, and return to his life. But the more he learns about the mysterious and beautiful assassin, the more she intrigues him. With the world falling apart around them, they must decide if they can trust each other despite the deceptions they face. If they can’t, they’ll die.

Wild Boys by C. Margery Kempe
It’s the end of the world and Digger’s trapped in a prison with some very wild boys. He loves the charismatic Joey, but he’s too busy fighting to be leader to notice. What are the odds they’ll all kill one another before they can escape?

Love Voodoo by Alyssa Breck
After a chance tarot card reading in a New Orleans voodoo shop, vampire Luca is intrigued by Collette, an alluring woman with uncanny intuition. Getting intimately involved with a human is the last thing Luca has in mind, but Collette wins his trust and their friendship grows into something deeper. When Luca’s clan learns that he has asked Collette to perform a spell against his psychotic sire, a deadly chain of events unravels that will change their lives.

Union of the Snake by KC Burn
After his fellow human colonists were enslaved by the Hilruda, Zerek, smuggler extraordinaire, made pissing off the alien oppressors both a career and a calling. When Essian, a sexy clan leader of the planet’s third species, needs Zerek’s help to fulfill a prophecy, the temptation of taking down the Hilruda is too good to pass up. Falling for Essian is not part of the plan.

Girls on Film by Linnea Alexis
After years of trying to break into mainstream movies, adult film actress Sophie Greene lands a role in a major motion picture. But not everyone is celebrating her good fortune. Her lover, Greg Vega, wants her to quit films entirely. And when a stalker emerges and begins sabotaging her career move, things get downright dangerous.

Rio by Sabrina Sol
When workaholic CFO Chase Simon is forced to take a tropical vacation, he sure as hell doesn’t expect to enjoy it. But when he finds out that he’ll be spending the next seven days with Rio, a sexy celebrity dancer from his past, his doubts begin to fade. Will life in the real world ever be the same for Chase again after discovering paradise in Rio’s arms?