↓
Home→Blog→Books→Join in the Party on June 20! Books, Games, Prizes! 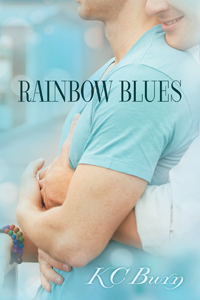 Friday June 20 – I’m having a Facebook party to celebrate my new release, Rainbow Blues. There will be lots of games with prizes from me and some of my awesome, kick-ass author friends, including Tara Lain, Lex Valentine, Katie Reus, Lori Sjoberg, Kiernan Kelly, Wynter Daniels, Jessica Freely, Belinda McBride, and Louis Bacio. RSVP using the button below and have fun!

Having come out late in life, forty-three-year-old Luke Jordan is at a loss about how to conduct himself as a gay man. As a construction manager, he’s not interested in being out at work, but he’d like to find a boyfriend or at least some gay friends. Two years after his wife got all their friends in the divorce, he’s no closer to the life he wants.

Zach, Luke’s adult son, takes charge and signs him up for the Rainbow Blues, a social group for gay blue-collar workers. At an event, he not only finds friends but meets Jimmy Alexander, part-time stage actor and full-time high school biology teacher. Jimmy loves the stage but wishes potential boyfriends weren’t so jealous of the time he devotes to it. When he meets Luke and finds him accepting of his many facets, he thinks it’s a dream come true.

Their relationship quickly moves into serious territory, but their connection is tested to its breaking point by the offer of a juicy movie role that takes Jimmy to the opposite coast and into the path of a very sexy costar.
Available for preorder at Dreamspinner Press.