↓
Home→Books→Union of the Snake – More Info 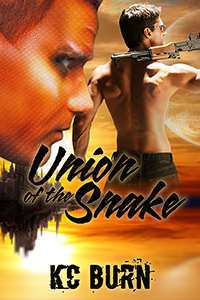 Union of the Snake

Available from Amazon. Coming soon from other retailers.

Zerek, a smuggler and rebel, has made a life’s work of trying to save his fellow humans from enslavement at the hands of the predatory Hilruda. But humans are losing the battle and once they’re no longer a threat, the Hilruda will turn their attentions to the third species on the planet, the Kadrussians.

Essian, leader of the Snake clan, is the closest to a prince the Kadrussians have. There’s no way he’s going to let the Hilruda become the dominant species on the planet but none of the clans can stand independently against them. Overcoming generations of autonomy to unite the clans would be tricky enough, but doing it without the Hilruda realizing what’s going on will be impossible. But Essian’s found a secret weapon – Zerek.

An unexpected attraction between the two complicates their mutually beneficial agreement. The idea of Essian choosing a simple human smuggler over a more appropriate Kadrussian mate is unthinkable, no matter how much Zerek might want otherwise. Cooperating with Essian might be Zerek’s last chance to save humanity but it could cost him his heart and his happiness.

“Get in there, you human scum. Your first fight is tomorrow.”

The larger prison guard slammed the base of his lance into Zerek’s shoulder blade, sending him stumbling into a cell. He caught himself, barely, before slamming his head against one of the rough, uneven rocks that formed the walls of the tiny enclosure.

The Hilruda guards had done nothing to loosen the bonds, which held Zerek’s wrists during his sentencing. With a bit of determination and strength, he should be able to use those damp, lichen-covered rocks to work his way free. Otherwise, he’d be fighting the next day with a fairly severe handicap. More severe than the concussion making his vision blur.

Once the guards left, the only light left was the dim orange flicker of torchlight. Barely enough to see his hands in front of his face, but he’d heard enough stories about the Stony Gate prison facility to know the comfort and well being of the inmates were immaterial. Especially the human ones.

His twin life goals had been to both avoid ending up in Stony Gate and to be prepared in case he did. Fortunately, he’d failed at only one of those goals, so he was confident he had a decent chance of surviving the pit fights until he could figure a way out of this cesspool. Escapes weren’t unheard of, but they were quite rare. Zerek intended to become the feature of whispered stories told around the work camps. Well, he already was. He had a reputation to live up to, and it didn’t include engaging in prisoner exploitation combat to gratify the increasingly rapacious appetite of the Hilruda.

Forgoing the ratty and likely parasite-ridden bed for now, he settled on the chilly floor by the most lethal outcropping of stone and began the laborious process of cutting through his bonds.

Soon, he fell into an almost hypnotic rhythm, the rasp of rope on rock giving him something to focus on besides the echoing sounds of human suffering. He’d never heard how many people Stony Gate could hold, but what did numbers matter? Humans had been ground down to little more than slaves of the Hilruda over the past couple of generations. No one could take the Hilruda to task for their ill treatment of any human, never mind overcrowding in a facility filled with people deemed criminals. Even if most of them were innocent.


Reviews
↑
We use cookies to ensure that we give you the best experience on our website. If you continue to use this site we will assume that you are happy with it.Ok