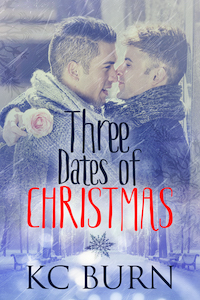 Available at Amazon, Barnes and Noble, iBooks, and Kobo.

Dean Murphy hates Christmas a little more each year. His job as a pharmacy manager requires him to festoon his store with seasonal cheer, but his distaste for the lurid commercialism is only topped by his irritation with the syrupy sentimentalism. Being alone sucks, but he’s managed just fine without friends or family for years; why should December 25 be any different?

When the tattooed Tony Delvecchio walks into his store, Dean hopes that maybe Tony’s different. Maybe Tony’s the man who won’t be driven away by Dean’s Scrooge-like tendencies. But Tony loves the holiday season, and he challenges Dean to three dates. Three dates to change his mind about Christmas.

Despite knowing it will all end badly, Dean does the unthinkable. He agrees.

Right by the Christmas display, a man with short blond hair blocked the aisle, crouching in front of a small blond kid standing with his mom looking on fondly.
Tony really needed to get going, but he wasn’t going to say a word to clear the aisle, because the ass attached to the blond man looked like a present designed just for him by the Christmas spirits. Taut, firm buttocks stretched charcoal dress pants. A silvery vest fit snuggly over a tapered torso. Pants and vest both perfectly complimented the lilac dress shirt, which looked crisp and freshly ironed.
A slight frisson of sexual awareness electrified him. If the guy added a tailored suit jacket and his face wasn’t hideous, he could easily fit the bill for Tony’s suit-porn fetish. He hated wearing staid business attire, hence the full sleeve tats, small ear gauges, and a job that didn’t fuss too much about appearances. But, holy hell, he did like a lover who dressed well. And there wasn’t any harm in looking at a hot, straight dad.
All too soon, the nicely built guy stood.
“Thank you. Merry Christmas, Mr. Murphy,” the mom said and turned away, tugging her son with her.
Tony had a split second to process that Mr. Murphy wasn’t her husband before the man whirled around, lips curled into a faint look of distaste, and nearly knocked Tony off his feet.
Raising his hands defensively, Tony barely managed to avoid a collision. The guy’s disdainful expression disappeared lightning-fast, only to be replaced by a plastic smile that might have fooled Tony if he hadn’t seen the first glimpse. Faked expression or not, Mr. Murphy was one serious hottie.
The mini candy canes hooked over the edge of both vest pockets appeared slightly out of place, but Tony wasn’t complaining—he loved candy canes.
“I’m so sorry. Are you okay? I should have been paying attention to where I was going.” Mr. Murphy’s voice was rich and buttery, like freshly baked shortbread, and Tony wanted to listen to the man all day.
“No harm done.” Tony couldn’t keep his own voice from deepening, but he did manage to bite back the very suggestive “Mr. Murphy” that wanted out.
“Oh, good. I’m so glad.” Mr. Murphy let his gaze flick from Tony’s chest to groin, then back up to his eyes so quickly that a straight guy probably wouldn’t have noticed. The Christmas spirits were favoring him, big time. Sexy Mr. Murphy was gay, no matter how discreet his perusal had been.
“Can I help you with anything?” The inflection came out with a slight suggestiveness and there was no hope. Tony was a goner. He was taking the opening, even though Mr. Murphy’s suddenly pink cheeks indicated the slip may not have been entirely intentional.
“My name is Antonio—Tony—Delvecchio. I’ve recently moved into the area and I could use a companion for coffee later tonight.” Tony hauled out his best smile because, damn, he wanted to get to know Mr. Murphy, purveyor of candy canes.
The pink in those apple cheeks intensified. “Welcome to the neighbourhood, Tony. I’m Dean Murphy.”

Reviews
↑
We use cookies to ensure that we give you the best experience on our website. If you continue to use this site we will assume that you are happy with it.Ok