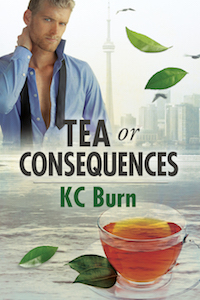 Maybe Riley isn’t living up to his full potential, but being a temp executive assistant suits him. He’s never bored at work, he’s got friends who let him geek out, and he’s got a carefully crafted twink exterior… which might be getting constrictive now that he’s on the other side of thirty. Life isn’t perfect, but it’s comfortable.

It all unravels when he takes a job working for a tea-obsessed cosmetics queen, the owner of Gautier Cosmetics. During the launch party for a new product, Riley finds his boss dead under suspicious circumstances, and the homicide detective is none other than Tadeo Martin, Riley’s high school obsession who never knew he was alive.
Tad drafts Riley to get the scoop on the inner workings of Gautier, and for Riley, it’s like a drug. His natural inquisitiveness is rewarded with more and more Tad. Unfortunately, his snooping puts him in the running for two other roles: suspect and victim. The killer doesn’t care which.