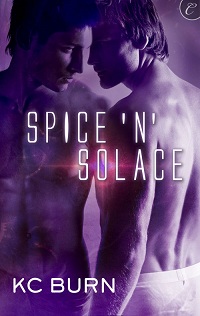 The Galactic Alliance’s most important negotiator, Jathan One-Moon, is responsible for ensuring the yearly negotiations with the Ankylos are successful. If he fails and the Ankylos go to war, the human race will likely be exterminated. As if that wasn’t enough, he’s under pressure to marry and produce an heir. When he mistakes the brothel owner, Kazha Deinos, for his escort prior to the negotiations, the resulting evening makes Jathan realize his life is missing a man who can be a true partner to him.

Kaz never met his most important client, and Jathan’s misconception allows Kaz the freedom to give in to desires he’s never let himself indulge in before. But Kaz has a business to run, one that a rival is trying to steal, which will force him to reveal his true identity to Jay. There’s also the little issue of Jathan’s impending marriage. Kaz is not interested in being a boy on the side of Jay’s marriage, no matter how much he’s come to care for Jathan. Will Jathan and Kaz find a way to be together, or will losing the man Jathan’s grown to love be yet another price he must pay for saving the human race?

The unmistakable lurch of a shuttle docking coincided with the chirping of Jathan One-Moon’s comm unit. Bram Hakers was beginning to piss him off. Jathan silenced the device, wondering what the alliance’s undersecretary would do if he turned it off. He’d talked to Hakers every day of his trip to Elora Ki, and he wasn’t doing it again. For some reason Hakers—and the rest of the alliance—treated this brief sojourn as nothing more than an exotic vacation for Jathan, with the alliance picking up the tab.
Jathan did charge the alliance an enormous amount, but they were the reason Jathan had been forced to become a negotiator in the first place. His other negotiations paid well, but they were on a much smaller scale. For the Ankylos negotiations, Jathan charged the alliance in proportion to the almost unimaginable consequences of failure. Because if Jathan failed, the human race could be snuffed out.

Every year he returned to Elora Ki, the site chosen because of its position as the farthest planet from the center of both the Ankylos Empire and the hub of planets ruling the Galactic Alliance. Every year he repeated the negotiations on behalf of the human race.
In truth he’d do the negotiations for free. Diabolical not to, since the Ankylos wouldn’t negotiate with anyone else after his father died. Without him the Ankylos Empire would renew the Wolframite War with the Galactic Alliance. But people didn’t respect things they got for free, and Jathan wanted the alliance to respect his services. Unfortunately Hakers acted as though the exorbitant fees meant Jathan was his slave for the length of the negotiations. With the Ankylos refusing to negotiate with anyone but a person in his father’s bloodline, he was a prisoner of sorts.

A knock sounded at the door to his quarters.
“Come in.” The military escort to his headquarters had arrived.
“Sir. We made good time. We’ve docked early.”
Dammit. Should he contact Spice ’n’ Solace? With his escort due to arrive the next evening, was it worth altering those arrangements? “Yes, thank you. I’m almost ready.”
Jathan fastened his bag and hefted it to his shoulder.
“Sir. Let me take that.” The well-put-together soldier moved into Jathan’s personal space, took the bag and smiled.
Jathan looked down at the man’s face, assessing his motives. The blond was good-looking, although broader and more muscle bound than his usual type.
The soldier used his firm chest to pin Jathan against the wall—under other circumstances a move like that would have made Jathan’s cock swell. Before the negotiations, though, the aggressiveness didn’t work for him.
“We’re on unexpected furlough for the night.” The soldier might have been making conversation, but the erection pressing into Jathan’s hip made his words an invitation.
“Tempting.” Jathan pushed all inflection out of his voice and painted on his most disdainful expression. This wasn’t what he needed. Not now. Military men weren’t equipped to give in, to submit. “But not a good idea.”
The blond quirked a brow. “Sure? Everyone knows how you spend your nights on Elora Ki.” His hips undulated against Jathan’s. Lies, clearly. If everyone knew what he did—he peered at the shorter man’s name patch—Williams would know this wasn’t the approach to take.
Although the forthright invitation was at odds with a man on duty, starfuckers were rather single-minded. He’d fucked others, but it made him uncomfortable. Still, the blond was quite attractive.
“You going to be part of my escort on the return trip?”
“Mmm, I think so.”
On the way home might be a different story. “We’ll talk then.”
“Yes, sir.” Williams stepped back before leading the way out of Jathan’s quarters. In many ways Jathan preferred to pay for his pleasure. No strings, no expectations on the part of the escort and Jathan could take what he needed to make it through another year of negotiations.
Jathan took out his comm unit, still unsure if he wanted to call for an escort. The unit chirped in his hand. Undoubtedly Hakers again, toadying little suck-up. Screw it. He’d had enough. Jathan turned the device off, determined to pretend that for at least one night no one relied on him to save countless human lives.

4.5 Stars from Scattered Thoughts & Rogue Words! I enjoyed reading this book just as much as I did Alien ‘n’ Outlaw. Spice ‘n’ Solace introduces us to all the characters we meet in the second with one exception, and the author’s gift of giving the reader realistic characters and backgrounds continues here.

Top Pick – 4.5 Stars from Night Owl Reviews! “I will recommend this one as a must pick up.”

4 rating from Anonymous Mouse! “I enjoyed the hell out of this book.”

4 scars from Black Lagoon Reviews! “I loved the voice in which she wrote the characters, quickly creating men and secondary characters that were endearing, interesting and complex with great emotional appeal and inner turmoil.”

Lovely review from Stella Matutina! “Oh, the fun I had with this wee book! It’s further proof that good things come in small packages.”

5 stars from The Romanceaholic! “It was sweet, sexy, romantic, and intense.”

A Top Pick at Romance Divas! “The intimate scenes are sizzling… the end came far too soon…”

4 stars from Reviews by Jessewave! “A well done story about two men who never expected to fall in love, but their secrets could end any chance at a future together.”