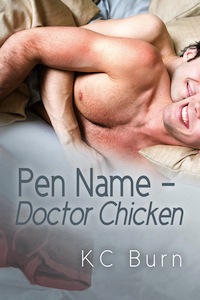 Sometimes Stratford Dale feels like Doctor Chicken consumes his life. It’s his pen name for a series of wildly popular children’s books. They were his brainchild; he meant for them to be a way to pay his many bills while he pursued his dream of publishing graphic novels. But the Doctor Chicken contract was a raw deal; instead, he churns out book after book for a pittance, leaving him broke and no closer to his dreams.

Stratford’s dreams of love have fared no better, but he’s still trying. After yet another disastrous date, he’s intrigued by a man going into a cooking class—so he takes the class too. Vinnie Giani is a successful, self-made man who is charmed by Stratford’s bow ties, sharp humor, and clumsiness—which leads to an opportunity to take Stratford in for stitches. Vinnie is, above all, responsible, having taken on the care of his mother and sisters from a young age. Perhaps it’s natural when he begins to treat Stratford more as a child who needs a parent than as an equal partner. But when Vinnie tries to “fix” Stratford’s career woes—including the Doctor Chicken problem—and ends up making the situation worse, their fledgling relationship may not withstand the the strain created by blame and lies.

Stratford stuffed two jumbo shrimp in his mouth and tried not to choke because of Barry’s unexpected questions. At least chewing prevented any necessity to reply right away.

When he’d agreed to go out with the cute young accountant from the real estate brokers in the same building where his own company was headquartered, he’d been thrilled. They’d flirted lightly for weeks, but Stratford had kept him at a distance. After all, he’d met Barry after he’d started seeing Nik. Then his relationship with Nik had imploded after he had met someone better than Stratford. He must have been giving off “available” vibes, because yesterday was the first time he’d ended up alone in the elevator with Barry, and Barry had immediately asked him out. And given him a promising grope.

Stratford had been even more thrilled with the plan when Barry had suggested they meet at Neptune’s, one of the trendiest new seafood restaurants. Although he couldn’t assume Barry was picking up the tab, he’d been courteous, and Stratford had been the envy of every gay man and straight woman they’d seen. Sure, they’d talked mostly about Barry, his job and life and friends, but that was okay. The parts of Stratford’s life that weren’t unbearably dull were pathetic or embarrassing. But he had high hopes for Barry. Until now, when they’d started discussing what they’d do after dinner.

For a first date, at least, one that didn’t start in the bathroom stall at a club, Stratford had assumed they’d do something completely prosaic like a movie. Maybe a dance club. After all, he was getting to the point where he had to consider he had work the next morning and the fact that he needed to be mostly awake for it. What he hadn’t expected was a frank and totally bizarre discussion of where they were going to get their freak on tonight. Apparently after picking up toys and aids.

On the other hand, he was getting tired of being alone all the time. After his best friend, Abby, moved in with her boyfriend, and he had a chance to watch how she and Thad interacted with each other, he realized he wanted that. He wanted someone in his life who was his, who would be there for him and whom he could build a life with.

After the Nik debacle, Stratford had high hopes it would be Barry, because he was getting tired of the depressing search. Barry had so many good qualities. He had a job and wasn’t completely brain-dead. He didn’t seem to be looking for a daddy. He seemed utterly normal and perfectly perfect. Stratford bit his lip to stop the alliteration, even if it occurred in the confines of his brain. He got more than enough of that at work, and he wasn’t going to indulge on his own time.

After he’d chewed just about as long as he could without it appearing as though he had some sort of chewing disorder or had to chew each bite one hundred times, he swallowed. He had to say something.

“Hey, are you wearing a plug? If not, maybe we should get you one. Especially if we go to Q’s. You want to be ready. Some of those guys are fucking hung.”

An undignified and unmanly squeak escaped, and Stratford snuck a few sidelong glances at the other diners, wondering if they’d heard Barry. “Uh, no. I’m not. Wearing one, I mean.” And he wasn’t sure he wanted to go and buy one. Plugs were a little intimate, weren’t they? After all, he’d found out a fair amount about Barry’s life, but he hadn’t even found out if the man had brothers or sisters yet, and Barry knew next to nothing about him. Had they truly progressed to a frank discussion of butt plugs.

Stratford took a deep breath. Maybe he hadn’t found a man because he was a little too inhibited. At least when it came to dating. Certainly Nik had thought so. Maybe this was more normal than he’d expected. “So, are you… uh… wearing one?”

Stratford blinked. Somehow, in their abrupt conversational turn to sexual proclivities, Barry had assumed Stratford was some sort of power bottom, who, with the aid of his best friend, the always-present butt plug, would be willing to bottom not only for Barry but some random well-hung guys at an as-yet-undetermined club.

B Listed by Jules at Gay List Book Reviews! “If you like a sexy alpha man that is used to taking care of people and a cutie that doesn’t know his own worth this book will suit you nicely.”

4.5 Stars from Heather C at The Blogger Girls! “OhMyGod! I loved so many things about this book!!”

5 Stars from Lisa at The Novel Approach Reviews! Not only was there a great love story and some very touching moments between them, but there was some laugh out loud moments that you won’t want to miss.
4 Stars from Nikyta at The Blogger Girls! The story is a nice mix of exploring their feelings, wants and dreams and trying to walk on eggshells around those issues.

4.5 Hearts from Gigi at MM Good Book Reviews! I needed a good sweet contemporary romance with plenty of laughs and this hit the spot.

4 Stars from Christy at Rainbow Book Reviews – “OMG I haven’t laughed that hard over the description of a first date in my entire life.”
4.25 Stars from Mandy at Hearts on Fire Reviews – “It was a sweet and funny story,there are some scenes that actually had me laughing out loud.”
5 Stars and Top Pick from The Romance Reviews – “Enjoyable character driven romance with a couple of nice guys finding their true love.”