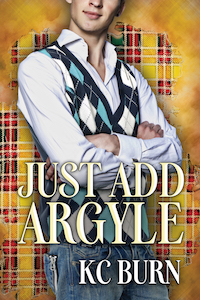 Tate Buchanan is a troublemaker who can’t keep a job, no matter how many times his lucky argyle sweater gets him hired. Add to that a learning disability and an impetuous nature that sends him into altercations to protect the defenseless, and he hardly manages to make friends, let alone find a man who’s interested in him for more than one night.

Most people think EMT Jaime Escobar is a player, but the truth is he wants a serious partner—he just can’t justify wasting time on guys he knows aren’t a match. But when he treats a gorgeous redhead after a fight, he finds the spark he’s spent so many years looking for.

Jaime wants to take the next step with Tate, but it’s clear Tate’s not going to curb his impulsive behavior—his next fight sends him to the hospital. Jaime’s relationship with a near criminal isn’t something his family is ready to accept, not any more than Tate is willing to be kept a secret. Jaime will need a lot of understanding—and some luck of his own—to keep them both. But this is one fight he’s going to see through to the end.