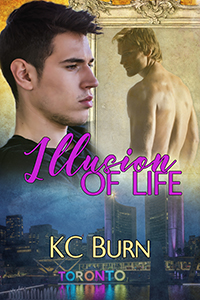 NOTE: This is an expanded, revised version of a previously published work. The title and publisher have changed.

Newly single Tyler Williams ought to be out partying every night, sampling the buffet of gay men Toronto has to offer. Carefree and casual has never been his style, even less so now that he’s a tenure track history professor approaching thirty, but he has a better chance of finding Mr. Right in a club than on an app.

Distraction from his dismal love life comes in the form of a housewarming gift – a life sized portrait of a gorgeous naked man, complete with a mystery.

Maxwell Friedland, a Depression-era artist, went missing shortly after posing for the portrait, presumably murdered by his lover. Finding out more about Maxwell and his disappearance plays right into Tyler’s love of both history and murder mysteries, but before long, Tyler finds himself obsessed with the man in the painting. It’s not long before he starts treating Max like a silent companion and sounding board. Max doesn’t judge or tell him he’s a failure at dating or cheat on him. Everything he learns about Max makes him yearn for a man long dead.

Trapped in the painting by a curse, Max has spent decades longing for oblivion. Until Tyler. Tyler is everything Max would have wanted for himself, and it doesn’t take many of Tyler’s one-sided conversations for Max to start caring more than he should. For all that Tyler has friends and family, there’s a deep-seated loneliness in him, one that Max wants to erase. But the thickness of canvas trapping him might as well be miles of stone for all that Max could be with Tyler for real.

Falling in love might be the worst curse of all.

Reviews
↑
We use cookies to ensure that we give you the best experience on our website. If you continue to use this site we will assume that you are happy with it.Ok