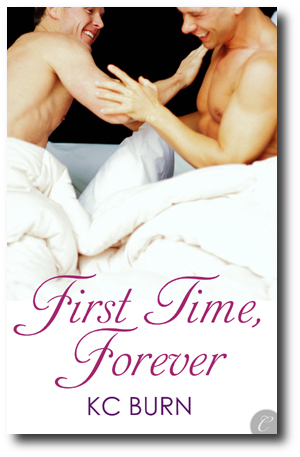 Derrick and Trevor used to have an incredibly passionate relationship, full of spontaneity and sizzle. Now that their son is off to college, they want to put their days of routine, vanilla sex behind them and bring back some of that spark.

Realizing that they’re empty-nesters, Trevor begins to notice their age difference. He suddenly feels old and unsure of himself, and isn’t confident Derrick still desires him. When Trevor decides to keep his health issues and gray hairs down there to himself, Derrick is hurt by his partner’s secretive behavior and thinks Trevor must be having an affair.

Nothing could be further from the truth, but Trevor doesn’t know how to communicate his fears to his partner. He desperately wants to reconnect with Derrick and rev up their sex life, but will it be enough to reclaim their marital bliss?

Breathing heavily, Derrick leaned against the car. He had no idea how Luke’s stuff was going to fit in that tiny dorm room. Likely Luke wouldn’t care about the lack of space. Living on campus would be a hell of a lot more fun for the kid than living at home with his dads.

Trevor exited the dorm and headed to the car, tape measure dangling from one hand. He’d looked kind of lost all day.

Derrick moved to meet his husband, tracing a finger lightly down his forearm. Trevor needed a hug, but a campus full of university students and their parents was far too public for him.

“How are you doing, babe?” Derrick asked.

Derrick didn’t believe him for a second. “Where’s Luke gotten to?”

“He said he’d be down in a minute.” Trevor fiddled with the tape measure, gaze on the ground.

“Don’t worry, babe, we’ll get through this empty-nester thing together.”

Trevor gave him a sad little smile, which helped Derrick smother the giggle wanting to escape at the thought of them as empty-nesters. Hell, he was only thirty-four and Trevor was still six weeks away from forty.

Luke ran out and skidded to a stop. “Hey, Dad, Derrick, we done here?”

“Trying to get rid of us?” Derrick ruffled Luke’s hair, getting an embarrassed glare in return.

“No, but some of the guys are going out for dinner and I want to go with them.”

“I think we’re done here. I got the measurements for your desk and dresser, so I’ll have them delivered tomorrow.” Trevor pocketed the tape measure and opened the driver’s door, wincing slightly as he did so. He’d better not be moving that furniture himself, not after straining his shoulder earlier in the week. Derrick had tried to take the heaviest boxes, but Trevor hadn’t taken too kindly to his interference.

“And your new laptop will arrive sometime tomorrow, as well.” Luke was probably the only guy in the dorm who’d have antique furniture and a fully loaded, state-of-the-art laptop. Not surprising, when one dad owned an antique store and the other was a network security consultant.

Trevor opened his mouth to say something, but Luke was already running back toward the building.

“Come on, babe, let’s get home. He’ll be fine. We’re only forty-five minutes away.” Derrick got in the car as soon as Trevor did and they pulled away.

A strange sense of loss tugged at him as Trevor guided the car onto the highway. The house would be much more silent without Luke’s energy. Hell, he was going to miss the kid as much as Trevor would.

Luke had been the result of a very young Trevor trying to convince himself he was straight. Not sure who he’d actually fooled, poor man. While Cassie was alive, Trevor had regular visitation and Derrick had been introduced to Trevor’s eleven-year-old son, all very proper, once Derrick and Trevor had realized how serious it was between the two of them.

Their lives had changed irrevocably the instant an inattentive driver on a cell phone plowed into the side of Cassie’s car while she was on the way to pick up Luke from soccer practice. Having to fight Cassie’s parents for full custody had been a surprise, but his and Trevor’s stable marriage, as well as their willingness to purchase a home in Luke’s school district, swayed the balance with the judge.

At fourteen, Luke moved into their home, and at twenty-nine, Derrick had to learn how to become a second father to a petulant, grieving teen.

4 Stars from Susan65 at The Blogger Girls! “Trevor’s and Derrick’s story was really a surprise hit for me and I think you will like it too.”

4 Stars from The Romanceaholic! “One thing that I can always count on from K.C. Burn is a beautiful mix of powerful, emotional romance and intense and sexy love scenes.”

4 Fairies from JBP Reviews! “This was a great short read about a great married couple finding themselves and the spark after a child.”

3 Hearts from Love Romances & More! “I really liked how an established older couple related to their own empty nest and the issues of getting older as well were written rather nicely and worked perfectly…”

5 Sweet Peas and a Recommended Read from Mrs. Condit Reads Books! “Ms Burn is so talented at writing characters I can’t help but think these are real people and I want to sit down and talk to them, go out with them, bake brownies and take them over for comfort when they’re sad.”

4 stars from Ed and Em’s Reviews! “This was a short, sweet and romantic story that was a great read!”

5 chocolate-dipped strawberries from Guilty Indulgence! “If you are looking for a quick read that feels like a full length novel emotionally and leaves you with that slightly flushed voyeuristic feeling because it seems so real, then First Time, Forever is a book that you don’t want to miss.”
B from Book Reviews & More by Kathy! “A beautifully romantic and deliciously sexy ending brings this delightful story to a heartwarming (and sigh worthy) conclusion.”