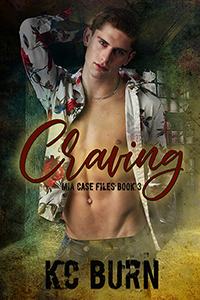 Years ago, Brandon Ellison and Oliver Cardoso were MIA partners and lovers. When a mishap on a mission tracking down werewolves renders Brandon unfit for field duty, their professional and personal relationships implode, leaving them shattered and alone. Unable to process his losses, Brandon moves away and cuts off all contact with Oliver.

When Brandon returns as head of MIA’s Research and Development team, the smart thing for his heart is to avoid Oliver at all costs. But he hasn’t been able to forget or move on. When an unapproved prototype nearly kills Oliver, Brandon suspects it was no accident. Determined to ferret out the truth, he knows the time for avoidance is over.

Oliver is tired. He’s never found another lover like Brandon, he’s lost his regular partner to reassignment, and he’s back out in the field with a poorly healed injury and a painfully green new partner. The last thing he needs is Brandon showing up, mid-mission, to cause trouble. But he can’t convince Brandon to leave.

Without any real closure the last time they spoke, the hurt and guilt have festered, making for a tense, antagonistic working environment. With an elusive portal and the Umbrae creating a previously unknown creature, hundreds of lives, including Oliver’s, are at stake, and they have no choice but to put their differences aside. But their unresolved feelings and an attraction that hasn’t waned creates a potentially fatal distraction. Falling in love again might destroy them both.

MIA Case Files revolves around the agents of MIA who investigate and contain paranormal activity arising from portals opening from other worlds.

As the sun set, a fiery orange blob in the sky, it lit up the tiny ski resort. Oliver’s hearing had slowly returned over the trek.
Carmichael, like the excellent operative he’d become, trailed him back to their room, silent, until they were alone.
Oliver turned and faced the man he’d brought into MIA almost three years earlier. Strangely, despite his taciturn and occasionally sullen demeanor, Carmichael made one of the best partners he’d ever had.
“Are you hurt? Can you hear okay?” Oliver let his gaze rove over Carmichael, checking for injuries and bleeding. If anything was wrong with Carmichael’s ears, they were finding a hospital tonight. He wasn’t risking another incident like his first near casualty in the field.
Their partnership had become even stronger after Carmichael settled into a serious relationship with Adam, whom they’d saved from a pack of Umbrae-infected werewolves. Oliver had come damn close to letting his admiration of Carmichael deepen into something else, despite his firsthand, painful knowledge that working agency partnerships and sexual relationships didn’t mix.
No one would ever know how Carmichael’s expression—shy yet smug—when he spoke of Adam sent a shaft of jealousy through Oliver every time. He’d been keeping people at an emotional distance for so long, there was no one to know, no one to confide those feelings in. Probably better that way, but it was so fucking lonely sometimes.
“What the fuck was that?” Carmichael’s face flushed with his fury. But his volume was normal—for Carmichael—and even though he hadn’t answered Oliver’s question, at least Oliver knew his partner’s hearing was fine. He continued to inspect Carmichael, only by sheer force of will keeping himself from lightly running his hands over the man’s limbs, checking for further injury.
“Is your hearing okay?” Carmichael asked, his tone a mixture of unwilling concern and sarcasm. “What the fuck was that?”
“Avalanche.” Oliver peeled the jacket off his state-of-the-art ski suit and threw it at the closed door. Carmichael raised an eyebrow but didn’t say a word about the uncharacteristic emotional gesture. The suit worked perfectly fine, but fear had frozen Oliver down to the bone. Safe in his room, anger began to thaw him.
“Thanks, Cardoso. Gee, I never would have fucking figured that out for myself.” Carmichael’s eyes flashed, and his hands clenched into fists. “I know you’re the expert, but do you think it was wise bringing the extra-noisy sonic charges with us? We set off a goddamned avalanche.”
Oliver braced himself for a punch, but it never came. “I know. Believe me, I’m going to have words with the research and development department about this.”
Carmichael began stripping off his outer layer, and instead of watching like a pathetic old fool, Oliver took off his ski pants.
“That’s all you have to say? Do we even know if we killed any innocents?”
Unlikely. Any dangerous overhang with innocents in the line of fire would have been subject to controlled slides. “I’ll have the agency look into it. You know that’s always a risk, but look at the bright side—the cleanup crew shouldn’t have any psychotic yeti to worry about.” Yeti weren’t all that different from werewolves, aside from their penchant for cold and snow.
Carmichael grunted.
“Are you sure you’re okay?” Oliver would do more than raise a stink with the head of R&D if Carmichael was injured beyond the obvious and shallow yeti claw marks they both sported.
“Bruised only. I got hit in the back by a couple of flying rocks.”
“Broken ribs? Bruised kidneys? Should we get to a hospital?” Their extraction and cleanup crew would undoubtedly be delayed by both weather and the avalanche. If he had to, he’d get Carmichael standard medical attention and lie through his teeth about the reason for the claw marks.
“Nah. Don’t worry. Nothing to get Adam pissed at you for breaking me.”
There it went. That fucking look. The one that told anyone with eyes how in love Carmichael was with Adam.
“Good, good.” Oliver stripped off the heavy black sweater he’d worn under the ski suit and hurled it too at the door. Yes, they’d prevailed, but he was still fucking pissed at how close they’d come to getting killed. “Let me order something hot from room service.”
Carmichael stepped over his pile of wet, snowy clothes and into the bathroom. A muscle in Oliver’s back screamed as he reached for the phone and ordered coffee and hot chocolate as well as a couple of burgers. Must have pulled something.
If he had his own Adam or Carmichael, he’d have someone to lovingly massage it. But he’d realized long ago there was no point in trying to find a relationship. Carmichael was the closest he’d come in a very long time. Even if he’d reconsidered his stance on getting involved with another agency operative, it was too late now.