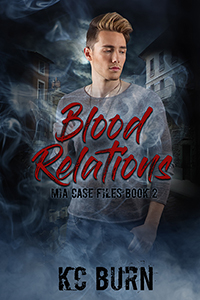 Frazer Nyland’s dating life has fizzled out. Dates and hook ups are easy to find, but none of them want anything deeper or meaningful. Meeting Cooper gives Frazer new hope, and he can’t help but fall in love. When one of his past hook ups is found dead, Frazer suddenly longs for the day when dating was his biggest woe.

Hounded by an overzealous cop, sexually harassed at work, and suspected of being a serial killer, there’s only one good thing in his life—Cooper. But as the lies and evasions build up, Frazer has to face a bitter truth. Cooper is not what he seems, and it wouldn’t be the first time Frazer had been played for a fool. Heartbreak on top of everything else seems like a cruel twist of fate, but if he’s arrested for murder, his love life might be the least of his problems.

Agent Cooper Wallace didn’t expect meet the love of his life while hunting an Umbrae-possessed vampire. Nor did he expect a scorching one-night stand to lead to a lasting relationship. But meeting Frazer changes a lot of Cooper’s expectations. Unfortunately, Cooper also didn’t expect his investigation of possible vampire victims to lead him to Frazer’s home town and the discovery that the disappearances can be connected to Frazer. Doing his job and closing the portal that spawned the Umbrae will save countless innocents but could cost him Frazer’s love and possibly his life.

MIA Case Files revolves around the agents of MIA who investigate and contain paranormal activity arising from portals opening from other worlds.
Although Adam & Carmichael both appear in this sequel to Wolfsbane, Blood Relations is the story of one of Carmichael’s colleagues, Cooper Wallace.

“Any more about that portal?”

“Looks like we’re going in. Tomorrow, likely. Local law enforcement found a body. Between that, Carmichael’s gut, and the disappearances twigging our search algorithm, it’s a safe bet the portal’s located in Brinton somewhere.”

Cooper nodded. At least Brinton was big enough they wouldn’t stand out like sore thumbs. Undercover work was a bitch in tiny towns, like the one Adam came from.

“Yep.” Adam waved the sheets he’d taken off the printer.

That was another benefit of not going into an extremely small town. The more inhabitants, the greater potential number of unusual occurrences, resulting in more blogs, tweets, or other online reports. Increased Internet chatter meant MIA noticed sooner. With any luck, they’d have this portal found and shut down before Friday. Canceling his weekend date with Frazer would be too disappointing.

“Ugh. That many? I assume there’s more possibles.”

Adam nodded and gave him a rueful look. Yeah, Coop didn’t want to know how many places they might have to search. Hopefully once they got there, they’d find something to narrow down their target area. It was one advantage to being able to sense the portals.

“Gonna call the new man? Maybe we can crash at his place,” Adam said.

What? He didn’t want Frazer involved in their investigation in any way. It was way too dangerous, as Adam should bloody well know.

But then he caught a glimpse of Adam’s teasing smile. Cooper should have known better. Adam lived with an overprotective field agent; he had to know Cooper would feel the same after having known Frazer a few days.

“Seriously, though, where do you want to stay? We could try and get a hotel not too close to his place, reduce the risk of accidentally running into him on the job. Or we could get a hotel real close, and you can sneak out at night.” Adam’s smile became more devilish.

Shit. Cooper hadn’t thought of that. Running into Frazer wasn’t a good idea on so many levels. Coop was a little afraid of Adam meeting his new lover. He didn’t want Adam to pity him for panting after a guy so clearly out of his league. Coop might have a master’s degree, but that didn’t make him any smarter than Frazer, and it sure as hell didn’t make him as hot as Frazer. Nothing more pathetic than a smart guy too stupid to know when he’s in over his head.

And there was the simple matter of telling the truth. Or not, in this case. There was no way he could explain to Frazer exactly what he was doing in Brinton. Given his lover’s recent experience with his client and discovering that his ex-boyfriend had started such an appalling rumor about him, Coop imagined Frazer might not easily forgive a breach of trust.

Wait. Cooper wanted to smack himself. None of that fucking mattered, not one bit. Clearly, since meeting Frazer, his groin had diverted blood vitally needed by his brain too many times.

Adam looked at him, waiting. How the hell was he going to admit this?

“Pick something near the city center.” Cooper fumbled with the papers on his desk.

3 Stars from The Romance Reviews! “This continues a good series.”

Received 4 Stars at Sensual Reads! … “The plot was amazing with lots of action and some very hot, delicious sex scenes.”

Received 5 Cups rating at Coffee Time Romance! …”The sex is of course blistering hot, but the angst-filled emotions are what make it just that much more drool-worthy.“

Received 4 Stars at Jessewave! “Secret agents battling paranormal beings – tall, dark and handsome meeting sweet, spicy blond – lots of hot, graphic sex – love against all odds and a satisfying HEA – this is a storybook paranormal m/m romance and, in addition to that, a very entertaining read.”

3.5 Delightful Divas at Dark Divas Reviews: “As a fan of any type of vampire novels, Blood Relations was a treat.“