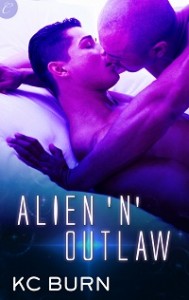 R’kos, son of the Ankylos Emperor, is expected to settle down. But he’s much more attracted to human males than to his own species. Eager to explore his forbidden longings, he steals a ship and heads to Elora Ki to see if he can find the right human guy.

Darien robs the corrupt to give to those in need, but now he needs a ride off Elora Ki, stat. Pursued by drug lords, he accepts help from the amorous stranger who calls himself Ricky. As they fly together along Darien’s route, their friendship quickly turns into passion.

But when Ricky is injured, Darien must contact the embassy to get his alien lover the medical care he needs. As Darien finds himself accused of kidnapping, and Ricky fears his family’s disappointment, can the two protect their growing relationship? Or are their differences just too great?

Weaving through alleyways and streets, both deserted and crowded, R’kos quickly became lost. Darien’s circuitous route had to throw off their pursuers. R’kos had no idea if they were in the same sector as before and he wasn’t even sure he could follow his own scent trail back to the pub.

“Hold,” he called, Darien for a change within speaking distance.

Darien turned around, gaze flitting around like prey being hunted. “Did you see them?”

“No, but someone’s coming. Might be them.” Unfortunately, Viko’s men were not the only ones who smelled of weaponry, and he’d been concentrating more on Darien’s scent than identifying the motley bunch that followed them.

Darien glanced both directions along the alley. R’kos wondered if they’d retrace their steps or try to move past the threat ahead. Instead of moving, Darien shoved R’kos, sending him stumbling back into a doorway.

“Wha—” The uneven, unyielding surface at his back scraped at his skin through the thin fabric of his robe. His heart thudded, and he could only imagine the scent cocktail he was emitting. Thank all the stars in the universe there wasn’t an Ankylos tracking them. Not yet.

“Shhh.” Darien crowded against him and the air between their bodies heated.

That wasn’t fair. Not at all. R’kos looked up into the inky shadows in the corner above them, willing himself to ignore the scent of smoke and spice in the soft hair sneaking into his hood to tickle his chin. He pulled his hips back as far from Darien as he could in the close space. Why didn’t his people have more information on human mating customs? R’kos didn’t know how much they differed from his own, but Darien wouldn’t want to know how close he was to stripping Darien’s clothes off and licking him all over. The tips of his fingers slid lightly over the oiled cloth of Darien’s coat. He’d shaken hands with a few humans, as was their custom. Did the rest of their skin feel the same as their hands? Did they have hair everywhere?

After a brief clatter of boots against loose pebbles, both scent and sound faded, and R’kos unclenched his muscles even as he sensed the tension bleed out of Darien’s body.

Darien stretched up. “You are a big one, aren’t you, Ricky? Let’s get going while we can.” Darien’s whisper heated his ear.

Jaw tight, R’kos only nodded, afraid any involvement of his mouth would result in an involuntary response like moaning or tasting. The urge to lick the warm skin so close to his lips was almost unnerving in its intensity, and he reveled in the freedom to experience those emotions.

Should be easier to follow this time, as his eyes had become accustomed to the lighting, more or less. Holding close to the side of the alley, Darien sped away and he followed as stealthily as possible. Darien halted and R’kos followed his lead, looking around. Surely they had not reached a destination. Nothing distinguished this alley from any of the others they’d passed through, as far as he could tell.

Bending over, Darien grunted and hoisted a circular metal plate out of the street. Darien curled his finger downward, gesturing for him to descend. He peered down past the circular entry into black nothingness, and a whole host of new scents wafted up.

Storm sewer. Sounded ominous. He’d never been on Elora Ki during their storm season, and he hoped they didn’t have any unusual storms while he was trapped down there. Gritting his teeth, R’kos lowered himself into the blackness. He’d trusted Darien thus far, no reason not to continue. Carefully he climbed down. Through his tight grip on the cool metal, he knew when Darien landed on the ladder above him, but he didn’t dare look up. At the bottom, he splashed as he stepped off the ladder and moved out of Darien’s way, into the palpable darkness. The light from the alley, as dim as it was, illuminated a faint circle on the shallow pool of water gathered on the ground. The grate clanged shut above him, cutting off even that meager source of visibility. He was well and truly blind down here.

A muffled shout sounded as Darien leaped off the ladder, accompanied by a flare of blue light.


Reviews
4.5 Fairies from JBP Reviews! “Though they were two very different species you could clearly tell thee two were meant to be and I loved reading every word of their story.”
Smart Girls Love Sci Fi on Alien ‘n’ Outlaw: “I do have a weakness for alien heroes and R’kos did not disappoint. Burn has a serious talent for making all of her characters richly drawn and complex.”
Rated B by Delighted Reader! “There were exciting moments, tender and passionate moments, and angst-ridden moments to keep it all moving along to a satisfying end.”
3.5 Stars from Night Owl Reviews! “The interaction between R’Kos and Darien was hot and intense and very well written.”