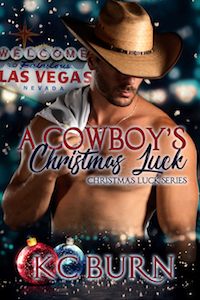 Available in audio from Audible.

Jonah Beecham is a down on his luck cowboy, stuck in Vegas with no money, no job, no friends, and Christmas rapidly approaching. Although he’d been promised a job as a bullfighter, the job falls through, and he’ll be sleeping in his truck for Christmas. In a fit of desperation, he drops a coin in an old-fashioned slot machine and wins enough to put gas in his truck… plus a little something extra. Rather than press his luck, he decides to leave the casino, but the universe isn’t done with him yet.

Zach Evans is a television writer from Los Angeles who loves all things cowboy. He’s in Las Vegas to do some research at an end of year rodeo event. Too wary to approach any of the sexy cowboys he sees, he finally takes a chance when he bumps into Jonah.

Spending the next week in Zach’s bed might seem like Jonah’s luck has changed, but when Jonah realizes he’s falling for a man who lives in a city where none of his skills are employable, he’s got a choice to make. Fear of the unknown will cost him Zach, but accepting that the universe has more luck in store for him might be more than he can handle.

Excerpt Coming Soon.
Reviews
↑
We use cookies to ensure that we give you the best experience on our website. If you continue to use this site we will assume that you are happy with it.Ok